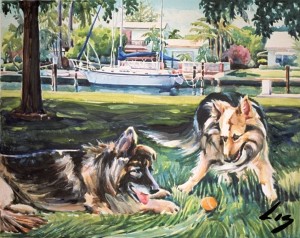 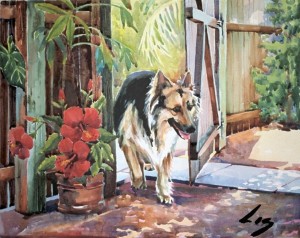 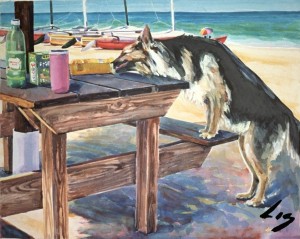 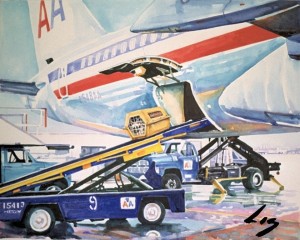 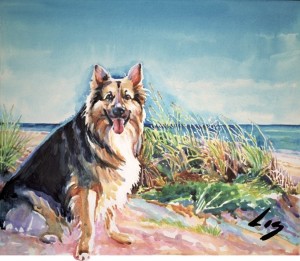 Bearka was the happiest dog in the whole world.  Not only did he live in a fine house, where he had good food, and big back yard to play in, and an older brother named Max, but he lived in Florida where it was warm all the time, and he never had to walk in the snow and cold.

Bearka had never been on a vacation.  He had not even thought about it because every day was a wonderful adventure for him.  The very best part of living in Florida was that Bearka lived near the ocean.  Each day he would go to the beach.  Oh, not that he liked swimming; he did not like the water at all. Especially when the ocean was rough and the waves came crashing in.

Bearka loved to walk along the ocean edge and see what there was to see.  He watched the sea gulls soaring above the water, the sandpipers running back and forth in the tide, and the speckled crabs digging homes in the wet sand.  He poked in the seaweed to find what marine life and shells had washed ashore, and just stood and sniffed the ocean breeze.

Bearka’s older brother, Max, did not come with him on his daily trip.  Max had arthritis and was stiff and sore.  He had trouble getting up in the morning, and sometimes had to take an aspirin.  But he was very wise.

Every morning when Bearka woke up, he and his older brother Max would have their breakfast outside under the tree.  Then they would play ball.  Bearka loved playing ball.  Max loved it too, but with his arthritis, it was a little difficult for him to run after the ball, so he would lay in the shade and watch Bearka play.

Then after breakfast, and playing ball, Bearka would sneak around the corner of the house, and make his way through the gate with the broken latch, and set out on his daily journey.

Bearka and Max always had plenty to eat, but Bearka loved to panhandle.  His wise brother Max would say, “One of these days your begging for food is going to get you into trouble.”  But Bearka never listened.

So on this particular morning, Bearka made his way as usual through the gate with the broken latch, and down the lane to visit all of his friends.

He said hello to Miss Molly, a big Doberman with a stubby tail and floppy ears that thought she was a little puppy.  Miss Molly sat outside every morning and waited for Bearka to go by.  When she saw Bearka, Miss Molly would wiggle her whole body to make up for having such a little tail.

Next, Bearka stopped by Sam the parrot’s house.  Sam loved Saltine crackers, but he was such a messy eater he usually dropped lots of crackers on the ground.  And Bearka always checked to see if Sam needed any help cleaning up.

Bearka walked on down the lane to Freddie’s house.  Freddie was a black Labrador who walked with a rhythm as if he were dancing, his tail swaying in beat to the music.  The little boy that Freddie lived with was named Addison.  And Bearka stopped by each day to see if little Addison had saved any lunch to share with him.  Today Bearka was in luck.  Addison’s mother had made hamburgers and French fries.  And Addison had saved his French fries to share with Bearka.  He gave one French fry to Bearka and one to himself until they were all gone.

Bearka always make sure to stop at the fire station and say hello to the firemen.  He waited until they were done polishing the fire engine before he barked and wagged his tail, which was his way of asking if they had any left over pizza that he could munch on.

He would stop and see the policeman who always had a cookie in his pocket.  And he waited at the corner of the lane for the postal lady to come by to see if she had brought him any yummies to eat.

After he had seen all his friends, Bearka make his way over to the beach.  He stood and sniffed the salt air, and watched the waves rolling in.  Then he turned and walked along the beach poking his nose in the seaweed to see what had washed ashore.

There were beautiful shells, and pieces of coral.  Bearka discovered a speckled crab tangled up in the seaweed, and when he sniffed it, the crab tried to bite his nose.

There was a ring billed gull who scolded Bearka as if it owned the beach until Bearka chased it, and the sea gull flapped its wings and went flying off crying its sea gull cry.

And there was a big, old pelican who just stood there and was not at all impressed with Bearka’s chasing up to him and barking.  Bearka put his head up in the air and went trotting on down the beach as if to say,  “Well, Mr. Pelican, I’ll chase you another day.”

He stopped by the picnic area and found a picnic table full of food people had left while they had gone into the ocean for a swim.  So Bearka helped himself to a snack.

Finally, Bearka neared his daily destination, the Resort Hotel.  Every afternoon the owner of the hotel would cook hamburgers, hot dogs, and all manner of wonderful smelling things on a grill that was on the beach in the shade of a palm thatched chi-chi the Seminole Indians had made.

There was a beautiful ocean breeze blowing, and from way down the beach Bearka’s mouth started to water because he could smell the hamburgers and hot dogs cooking on the outdoor grill.  He said to himself,  “Umm, they’re having barbecued chicken today too.”  “It’s my favorite.”  As he walked closer, the aroma became stronger and stronger.