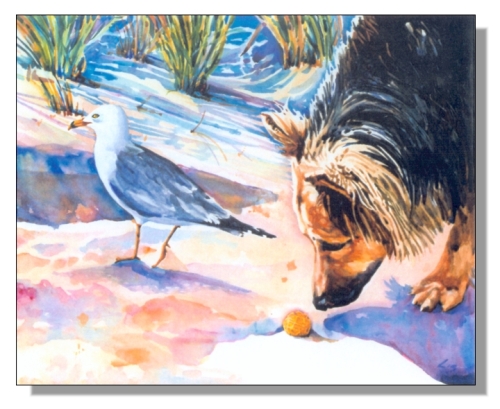 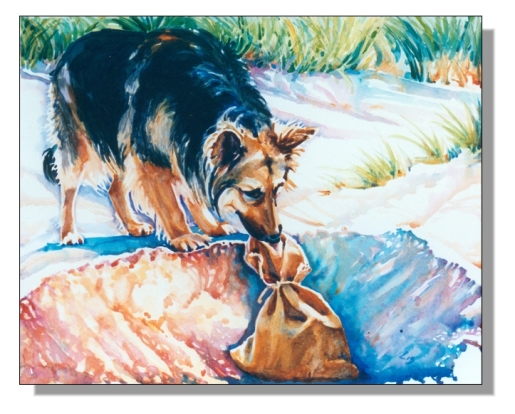 BEARKA AND THE BURIED TREASURE

Bearka just had the most wonderful dream about pirates and buried treasure. He stretched and yawned and lay thinking to himself, “Today is going to be an unusual day.” “I can feel it in my bones.”

Bearka shook himself and got up. He had his breakfast under the tree, and played his usual game of ball with his brother Old Max. Then he trotted around the corner of the house, and out through the gate with the broken latch. He set off down the lane to see what this special day would bring.

Bearka stopped at the corner of the road that ran along the beach. There was a group of people gathered around the newspaper box. He pushed his way through the people, and poked his head out to see the newspaper in the box. There was a picture on the front cover of gold doubloons and pieces of eight. Bearka thought, “I wonder what this could be?” So he listened to what the people were saying.

A man said to the man next to him, “Look, according to the newspaper, the special exhibition of Spanish treasure on display at the Museum has been stolen.”

“What happened to the treasure?” said the second man. “Nobody knows,” said the man reading the newspaper. “Somebody broke into the Museum last night and stole the treasure worth millions and millions.”

Bearka perked up his ears and listened. This was his favorite subject. He loved to listen to his friend, Capt. Jack, the owner of the bait shop at the fishing pier, talk about pirates and Spanish galleons and buried treasure.

Bearka hurried over to the beach and trotted off toward the fishing pier to see his friend Capt. Jack. When he reached the bait shop, Bearka poked his head in the door. Capt. Jack looked up from the bait he was rigging and grinned. “Hi Bearka. How’s my boy? Come on in here and let me rub your ears.” Bearka wagged his tail, and trotted in and sat down in front of Capt. Jack, who proceeded to give his ears a good scratching.

Capt. Jack used to be a fisherman. He had worked on fishing boats – ‘From Maine to Madagascar,’ as he loved to put it. He had the most wonderful stories to tell about his fishing days.

Capt. Jack had a young assistant named Ernie, who helped him out in the bait shop every afternoon after school and on Saturdays. Capt. Jack and Ernie loved to talk about pirates and buried treasure. Ernie was taking Scuba lessons so he could look for sunken treasure off the coral reef that lay a little way off the end of the fishing pier.

Bearka hoped that Capt. Jack and Ernie would be discussing the robbery of the gold doubloons and pieces of eight. And he was not disappointed. The robbery was the only topic of conversation that morning between Capt. Jack and Ernie. Bearka arrived just as they were starting to discuss how the robbers could have gotten into the museum to steal the Spanish treasure, and where that treasure might be right now.

Then Bearka grinned from ear to ear as Capt. Jack started to tell his favorite story about the olden days when pirates used to roam the Florida coast. The pirates knew when a Spanish galleon, loaded with gold and silver was about to sail back to Spain.

At night when it was dark and a gale was howling, and the waves were crashing against the beach, the pirates would put up a lantern on the shore. The captain of the Spanish galleon would be fooled into thinking there was a lighthouse and a safe harbor. The Spanish galleon would come toward the light, and would crash on the coral reef along the beach and smash to pieces.

The pirates waited until the ship had settled to the bottom of the ocean. And they would dive down and pick up the treasure chests full of gold and silver doubloons and golden plates, and jewelry with emeralds and rubies and other precious stones.

They would put the treasure chests in their dory and row over the reef to the shore. Where they would drag the chests up the beach above the high tide line, dig a deep hole, and bury the treasure.

Bearka imagined himself sitting above the shore on a sand dune, spying out the pirates as they came ashore in their boat. When the pirates had buried their treasure and gone back to their pirate ship, he would go down and dig in the sand with his paws until he had dug up the hidden treasure chest.

When Capt. Jack’s story was finished Bearka got up and wagged his tail good-by.  Then he trotted up the beach, and jumped over the low coquina shell wall that separated the beach from the road.