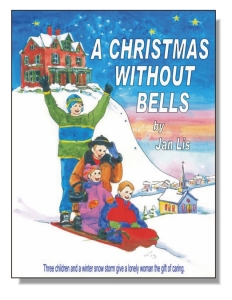 The sound of ringing Church bells floated over the crisp winter evening. It was six o’clock, and the darkening sky was flooded with pinks and purples. Jessie looked up as she heard the Church bells ringing.

Maybe she and her older brother Michael, and younger brother Toby would have enough time to make one more slide down the hill before they had to go in for dinner.  Each winter afternoon the children of the town would take their sleds and toboggans to the hill above Main Street, and slide until the Church bells rang at six o’clock. When they knew to head home because soon it would be dark, and supper was on the table.

Jess, Michael, and Toby ran up the hill for one last slide before the bells stopped ringing. It was the week before Christmas, and the bells always played a Christmas Carol before tolling the hour. The gentle chimes of O HOLY NIGHT drifted up the hill on this snowy winter evening, followed by the stately bells that rang six times marking the hour.

On top of the hill Miss Emily sat warmly beside the fire in her living room. Precious, her white Persian cat lay sleeping curled in the opposite fireside chair. Miss Emily lifted her head from the poetry book she had been reading and frowned. “Oh those Church bells again,” she said angrily to herself. “They ring morning, noon, and night. If that is not bad enough, the week before Christmas they play a Carol too. I have had enough,” Miss Emily said as she laid her poetry book down on the high backed fireside chair, and walked to the window.

She pulled back the green damask curtain, and peeked out the window that overlooked the town. The children had finished their last slide of the evening and were running, sleds and toboggans bumping along behind them, as they raced for their warm homes and dinner.

Miss Emily had never married. She was the only daughter of Ezra Potter, the wealthiest man in town. When Ezra passed away, he left his daughter the Potter Lumber Company, the Potter Hardware Store, the Potter Hotel, and the Potter First National Bank.  In short, Miss Emily inherited most of the town, including the huge red brick Victorian house looking down over the town from the hill above Main Street.

“Those Church bells have disturbed me for the last time,” Miss Emily said in a huff. “First thing tomorrow I am going to do something about them.”   She went back to her fireside chair, picked up her poetry book and sat down. “There,” she said as she straightened her dress, feeling quite pleased with herself. Precious closed her eyes.

The next morning Miss Emily rose early, and had her breakfast. She was just putting on her hat when the Church bells tolled nine o’clock. “That will be the last of those bells,” she said as she grabbed her purse and gloves, closing the kitchen door behind her.  The morning air was crisp, and the snow crunched as Miss Emily walked to the old carriage barn behind the house where she kept her car. “I think we are in for a bit of a snow storm,” she said to no one in particular, as was her habit.

“Won’t you please wait until I announce you?” asked the secretary. “I don’t need any announcing,” replied Miss Emily as she opened the door, and burst into Mayor O’Connor’s office.